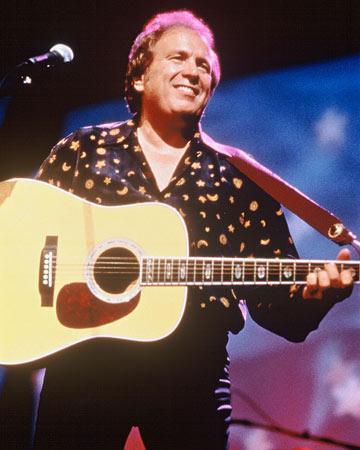 By Barbara Trainin Blank, Sentinel Correspondent
Some people run after honor. Don McLean prefers to write songs and sing. “I just do my thing,” he says. “I don’t need to see my name in lights.”

Perhaps he has seen his name in lights often enough. Twenty-two of McLean’s songs reached top spots on pop, country and contemporary charts. His “American Pie” was named one of the five greatest songs of the century in a poll compiled by the Recording Industry Association of America and the National Endowment for the Arts.

The song, released in 1971, won McLean instant fame. An eight-and-a-half minute folk-pop epic, it was inspired by the untimely deaths of singer-songwriters Buddy Holly, Richie Valens and The Big Bopper when their plane crashed in Iowa in 1959.

That year, as well, the songwriter composed “Vincent” after reading a book about Van Gogh. The song was played in Amsterdam’s Van Gogh museum and recorded more recently by Josh Groban.

Some 40 years after McLean began singing, he maintains an active performing schedule—in venues as diverse as unadorned nightclubs to Carnegie Hall.

“I’ll go to the farthest outreach to sing,” says the 61-year-old, who makes his home in Maine with his wife and two children. “I’m very interested in America. I always hated the rarefied level.”

One of the venues McLean is the Carlisle Theatre, where he appears tomorrow here.

Doing his “thing” has not meant being typecast. Some singers’ songs all sound the same, he says. “I’ve never been able to do that. I usually do no more than one type of song at a time. I don’t fit into any genres.”

McLean isn’t a moralist, but there’s a “moral component” to some of his songs. With a background in folk and traditional music, he relies on people “relating” to what he writes.

They have. McLean has earned 40 platinum and gold records and in 2004, was inaugurated into the National Academy of Popular Music Songwriters’ Hall of Fame. Several singers, including Madonna have recorded “American Pie,” which was inducted into the Grammy Hall of Fame in 2002.

The song remains, probably, one of the most-analyzed and talked-about musical creations ever. But though his Web site devotes some space to “American Pie,” McLean prefers “not to talk about it.”

He does say other tragic events fed into the song, such as the Kennedy assassination, the loss of innocence in America, and the death of McLean’s father when the boy was only 15.

Before that, McLean says candidly, he found no parental support for his early love of music. Childhood asthma made singing hard, but McLean spent long hours in the swimming pool to gain breath control.

“I came from a very dysfunctional family,” McLean says simply. “I never felt I belonged anywhere. And suddenly people embraced me. I got more back from my music.”

He has also been an inspiration to others, who prefer the melodic style of music he has embraced. In 1997, for example, McLean surprise-guest starred at Garth Brooks’ Central Park concert. He was even the subject of a pop hit, “Killing Me Softly With His Song,” performed by Roberta Flack.

In 2003, McLean’s song “The Grave” was recorded by George Michael in protest of the Iraq war. Then, last year, McLean himself released a career retrospective, “Rearview Mirror,” which included new versions of some of his best songs, such as “Vincent” and “Empty Chairs.”

He’s an affable guy, yet candid about what he dislikes — such as oversinging and “excess verbiage.”

“The world has become a video marketplace,” McLean laments. “There are a lot of attractive performers, some of whom can sing. Sometimes they sing songs that are extremely forgettable. They’re selling themselves and their personalities. It can be valuable entertainment, but it’s got nothing to do with what I do.”