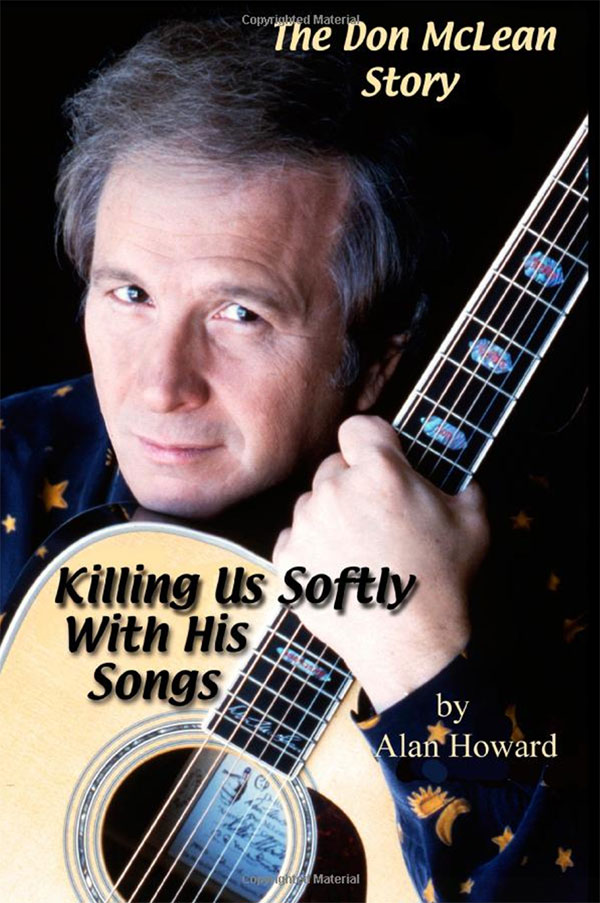 The Don McLean Story: Killing Us Softly With His Songs
By Alan Howard

‘…I wanted to counter the urban myths about me, and to get the full story out before someone else did,’ – Don McLean…

“Congratulations Alan on capturing Don’s life so well – a fabulous read – I highly recommend this excellent book to all – fans and just the curious – you won’t be disappointed.” Bob Gregg.

“…Alan Howard did a terrific job in not just sharing Don’s story, but revealing a personal side of Don rarely seen by the public.” Jim Monaghan, WDHA radio, N.J.

For the first time Don McLean shares his life story in this 420-page biography available now from amazon and other top bookstores. On this page you will find contents overview, extracts from four chapters and contact information for the author and Don McLean.

American Pie…Something touched me deep inside…
“Soon the relationship between McLean and Freeman became tense. They had different backgrounds and different ideas about how things should be done. Don liked to sing live, while Ed felt that convention dictated that vocals be over-dubbed. According to Freeman, McLean wanted a stripped-down, bare-bones production. ‘In spite of his pop influences and sophisticated material, that’s what he understood musically and felt comfortable doing.’ On the other hand, Freeman wanted to make a highly produced pop record, because that was musically challenging to him, and that was what was currently fashionable.”

Top producer Ed Freeman and Don McLean worked their magic brilliantly in creating the American Pie album but their relationship was not always as hot as their music. We hear from both Ed and Don about those tense recording sessions and what they really thought of one another.

On stage for the first time..
“Brother Nagle, the principal of Iona Prep, strode through the halls with his black robes flowing behind him, occasionally stopping to have a heart-to-heart talk with a student. Around exam time, Don let slip the fact that he was failing Latin III and had not actually passed Latin II either. Brother Nagle turned frosty and said to Don, “Well, you’re going to have to pass two exams in three weeks, or I will throw you out of here.”

Don decided to sign up for Latin study hall everyday after school in an attempt to jump the formidable hurdle placed between him and graduation. After about 10 days, Don asked his tutor, Mr Flynn, whether he thought he could pass. Mr. Flynn looked at Don and with a smile said, “Not a chance.” Miraculously, Don passed both Latin classes. Now he could focus on the talent show.

The talent show was held in a Quonset hut left over from World War II, architecture that today sells for millions in the Hamptons. On talent show day the Quonset hut was filled with 500 kids and all the teachers. Anyone brave enough to perform was liable to be severely ridiculed. First on stage was a 200-pounder who played the piccolo, bringing gales of laughter and a few spit balls. The next kid did a magic act. The reaction to this wasn’t much better.

When McLean’s name was announced, he was ready. He hit the stage with “Well, Well, Well” and moved into a version of “Good Old Wagon” that was better than his demo. He slowed things down with a Josh White tune called “Darlin.” By now the crowd was quiet. McLean picked up the banjo and frailed a wicked hoe-down, the notes shooting off the banjo like silver bullets. Don finished with “This Little Light of Mine,” a song that is still a standard part of his repertoire. When he finished, the students went wild. They threw their books and chairs in the air. There was bedlam. It was something straight out of a Hollywood movie.”

Meeting heroes…
“While working on his singing, Don wanted to make inroads into the musical world that he had heard about and read about throughout his childhood. In particular, he wanted to know more about the Weavers. By 1961, folk music was moving toward the peak of its popularity. Members of groups, such as the Weavers, were superstars. This did not faze 16-year-old Don McLean. He knew that Erik Darling, who had replaced Pete Seeger as the banjo player and tenor for the Weavers, lived in New York City, and he decided to call him. He found his number through the operator.

‘Is this Erik Darling of the Weavers?’

Don started right in asking him questions about music, about himself, and about the Weavers. Erik was immediately tuned in. Rather than being annoyed by the boy’s nerve, Darling was several steps ahead. He didn’t mind if Don called every now and then. He was always friendly and complementary. He was amazed that Don was just 16 years old.”

Crossroads…
His mother’s death in 1985 made him feel mortal for the first time. It wouldn’t be too many years before he had lived as long as his father. He had several beautiful homes, stocks and bonds, and no one to share it all with. His parents had never been impressed by money, fame, or material possessions. To them, all that mattered was a person’s character, and Don sensed that they would not be pleased with him.

His song “Crossroads” could serve as a metaphor for this point in his life. He says,

“I wanted to retire and join a monastery, because I felt I was becoming the wrong person. I didn’t like the person I was becoming. There was a part of me that was starting to use people. Part of my heart was dying and becoming cold. It was because I could do bad things that I did them. I realized that I was losing part of my sense, part of what my father had given me. I was self-aware enough to know that, and I realized that the only answer was to get out of the business and do something that could help me reclaim myself, reclaim my soul, and reclaim my spirit. I thought about joining a monastery, because I felt I would never find the right woman in my life. Leonard Cohen and Cat Stevens both withdrew to religion, and I know why. I actually asked the Lord to show me the way, to tell me what I needed to know or what I was supposed to do, because I was at a crossroads.”

Acknowledgments
Thanks to Don McLean for putting the post-war, twentieth century experience to words and music and singing it all with a voice that transports us to a better place. I want to thank him for sharing his story.

Thanks to Ann Morris at the Owl and Turtle Bookshop in Camden, Maine, for editing the manuscript.

And thanks to all the Don McLean fans who read and respond to my web sites: don-mclean.com and americanpie.com.