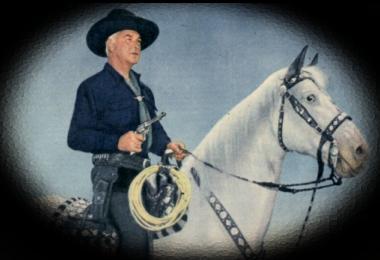 Don McLean’s poem about Hopalong Cassidy played by William Boyd in over 66 films between 1938 and 1945 was included on the inside cover of the American Pie album.

So Long Hopalong CassidyNo matter how scary life got I could depend on you
You had that easy smile and white, wavy hair
You were my favorite father figure with two guns blazing
Not even Victor Jory could stand up to those 44-40s you packed
And that stallion you rode, I think his name was Topper
He was so beautiful and white he even came when you whistled
I’ve always liked black and I loved your clothes
Black hat, black pants, and shirt
Silver spurs and two guns in black holsters with pearly-white handles
Black and white, that was you Hoppy
The bad men fell the good guys lived on
The ladies touched your hand but never kissed
Whenever John Carradine asked a question you’d say
“That comes under the heading of my business”
Then you’d call for another sarsparilla
I believed in you so much that I’d take my Stetson
off and put it over my heart whenever anybody died
My hat’s off to you, Hoppy
Say good-bye to all the boys at the Bar-20
The black and white days are over
So long Hopalong Cassidy