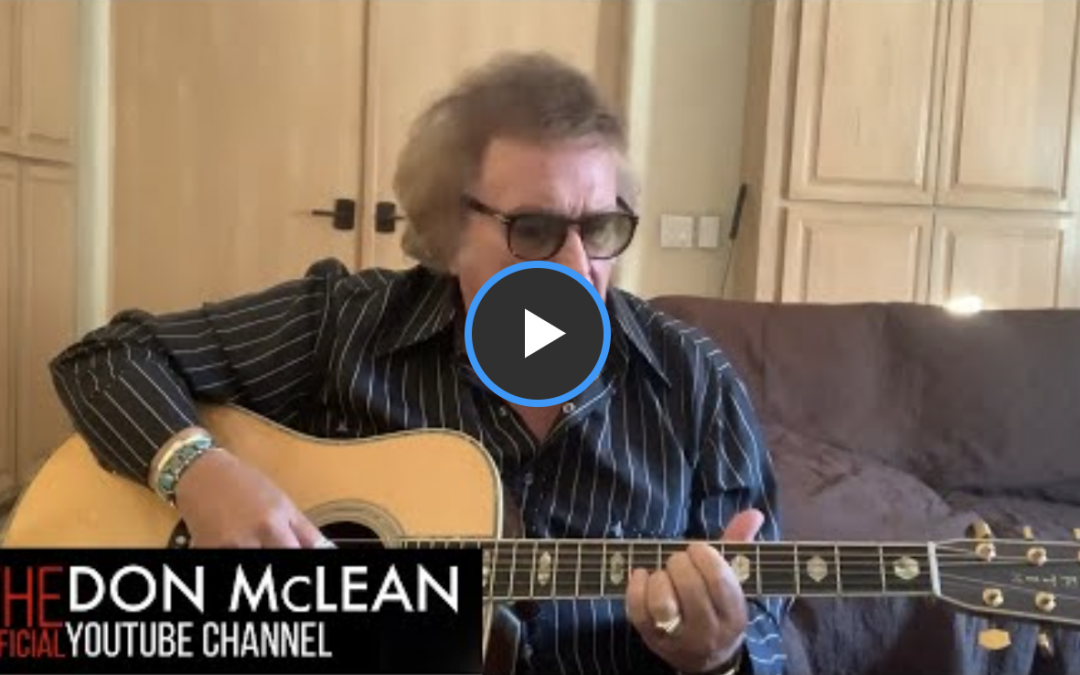 Don McLean is hoping to share some light – and wisdom – with music fans who are bored at home.

On Friday, the “American Pie” singer and Songwriters Hall of Fame member released a guitar tutorial on his YouTube channel, revealed exclusively on usatoday.com. The 30-minute video features McLean on acoustic guitar, offering tips and tricks about rhythm playing, finger picks, syncopation and more using classic songs such as “Empty Chairs,” “Grief and Hope,” and of course, “American Pie.”

“We have a situation here where there seems to be no clear path out, and I think that music and those kinds of things you love are probably the best friends you’ll ever have in a situation like this,” McLean says of the pandemic. “I want to send my best wishes to everybody. This will be over. Don’t despair. Go back to your records or music that gives you comfort. It will help you.”

More:Fender offers free online guitar lessons to pass the time in quarantine: Here’s how to secure a spot

McLean, 74, who is quarantining at home in Palm Desert, California, tells USA TODAY what you can expect from his inaugural virtual lesson.

Question: What sparked the idea for this guitar tutorial?

Don McLean: I’ve seen artists doing stuff like this on YouTube, and it’s something I’ve had on my mind to do. I wanted to do something for the young man or woman who knows how to play the guitar already, but to try to put in their minds a little bit more about the guitar and the voice and projection. I learned from players who really got the sound out of the instrument like Eric Darling, Josh White, Pete Seeger and flamenco guitarist Carlos Montoya. So I was trying to show the characteristics of a guitar I like, and then show a few techniques with songs (of mine) so the idea can be gotten across to the young person who’s playing the guitar and wanting to do this to make a living.

Q: Why is “American Pie” a good song for learning how to play?

McLean: It’s a good song to sing to get your breath control. It’s long and probably has a chord change every two words, and requires you to strum the guitar. It’s kind of hard strumming with a flat pick and to keep that going, so it’s a little bit of an aerobics (workout) as well.

McLean: They’re not learning to get the sound out of the guitar; the guitar is played in a wimpy way. Most people that I see play acoustic, the guitar is barely more than a prop that they wear around their neck. Great players like Josh White? That guitar ripped. If you ever heard Earl Scruggs play the banjo, it rang. Even Lester Flatt played a great acoustic guitar — there was a big sound. So to keep it inside the instrument, you get a very small sound. And that’s not what you want.

Q: How many guitars do you own?

McLean: I have over 50 Martin guitars. Out here in the desert, I’ve probably got 10. I like the early ’50s ones, but I have a 1990 D-41 (guitar) that I’ve used for 30 years. It has all kinds of cracks in the top that have been fixed. It’s the workhorse; I’ve done thousands of one-nighters with it.

Q: Could these virtual lessons become a weekly or monthly thing for you?

McLean: No, I’m too lazy to do that, but I might do one for the five-string banjo because I’m probably the only person left alive that knows the really great folk banjoists like Billy Faier, and Frank Hamilton and Bob Gibson. I know exactly how to do all that stuff because I was a sideman in the ‘70s sometimes on recordings — I’m on some Leon Redbone albums. So I want to show how things are done on that instrument just so people will know about it.