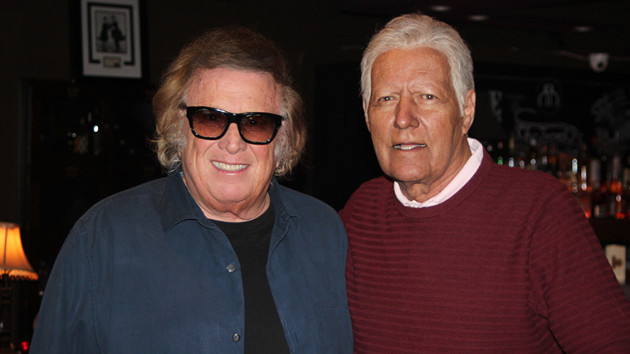 Wow! Don McLean got the surprise of a lifetime when Alex Trebek specifically requested he perform at his annual Christmas party. The “American Pie” crooner opened up to Closer Weekly about getting the opportunity to sing some of his hit songs at the iconic Jeopardy host’s 2019 bash.

“Well apparently, without my knowledge, Alex has been a huge fan of mine for many years,” the 74-year-old exclusively shared with Closer following his performance at the holiday celebration on  December 18th, noting the TV star’s people directly reached out to him regarding the request. “I said I don’t usually do this, but I’m more than happy to do this if it makes you happy.”

Although the audience was over the moon about Don’s holiday setlist, the iconic singer dished even Alex, 79, was spotted having loads of fun. “He was laughing and carrying on, and having the time of his life,” Don sweetly gushed.

Despite currently battling stage IV pancreatic cancer, Don insisted Alex was in good spirits. “He didn’t really talk about it,” the rock ‘n’ roller explained. “Everybody knows though. It was a wonderful evening free of all that bull s—t. It was a Christmas gift to him. He was joyful, loving, and like I say, a tremendous amount of grace under pressure.”

Following the Christmas party, Don couldn’t help but commend Alex — who has been open and honest about his cancer battle since being diagnosed this past March — for his strength and determination. “I’m not a really a guy that watched game shows, but I’ve known Alex Trebek all my life, we all have,” he said. “I know that everybody thinks of him as a very classy man, and he really is.”

Don even said Alex’s positive outlook hasn’t changed since undergoing treatment for his heart-wrenching disease. “I think he’s in his fourth round of chemotherapy and he’s witty, he’s light and he made everyone feel beautiful,” the Grammy Hall of Fame honoree gushed. “He’s not a ‘why me?’ type of a guy, he’s a man in the best sense of the word. He’s a terrific example of what a man is.”

Even though Alex was thrilled to have Don perform at his annual Christmas party, the “Vincent” singer said the true gift was being able to do a good deed for beloved game show host. “He gave me the best Christmas gift I could ever have, which was to do this for him,” he proudly marveled.