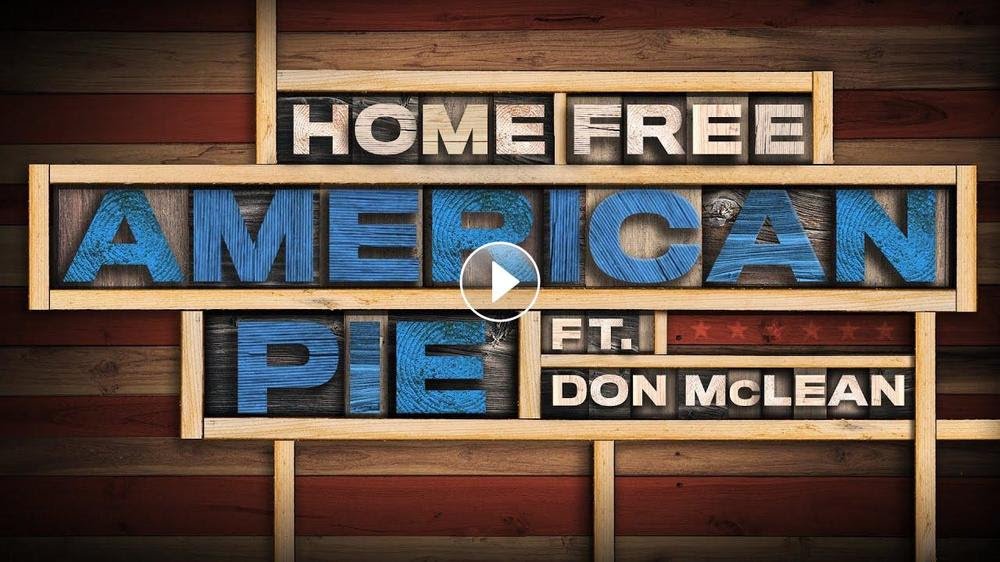 NASHVILLE, Tenn. – All-vocal Country entertainers Home Free and the legendary Don McLean are bringing their special rendition of “American Pie” to life with the brand-new video for their collaboration on the time-tested anthem – out now.

First premiering exclusively on The Tennessean earlier today, the clip visually enhances the making of this all-vocal rendition of “American Pie” – spotlighting each Home Free member and their individual parts as they come together with McLean to sing the story of the rise and fall of Rock & Roll in the 1960s.

With today’s video release, the collaborators are also observing the 62nd anniversary of ‘The Day the Music Died’ – affectionately coined after the lyric in McLean’s signature anthem – in remembrance of Rock & Roll legends Buddy Holly, Ritchie Valens, and J.P. ‘The Big Bopper’ Richardson.

“Any song which has a legitimate melody lends itself to an a cappella rendition,” McLean explained to The Tennessean. “The guys in Home Free just did their thing and did a tremendous job at it, too.”

“It starts in a way that’s just very introspective, very true to the words and to the moment ‘The Day the Music Died,’ and just how powerful that can be,” Home Free’s tenor Austin Brown continues. “But also, the hope that can come from the movement associated with an event like that… It really changed so much musically. While it was ‘The Day the Music Died,’ in a lot of ways, it was also the day that music was reborn.”

Fans can check out Home Free and Don McLean’s rendition of “American Pie” tonight on SiriusXM’s Outlaw Country, as it is set to be featured on The Steve Earle Show.

To keep up with Don McLean and be a part of his upcoming announcements, visit his website and follow his social channels linked below.
YouTube | Twitter | Instagram | Facebook | Website
About Don McLean:
Don McLean is a Grammy award honoree, a Songwriter Hall of Fame member, a BBC Lifetime Achievement Award recipient, and his smash hit “American Pie” resides in the Library of Congress National Recording Registry and was named by the Recording Industry of America (RIAA) a top 5 song of the 20th Century. A New York native, Don McLean is one of the most revered and respected songwriters in American history. After paying his dues in the New York club scene in the late ‘60s, he went on to score mega-hits like “Vincent (Starry, Starry Night),” “Castles in the Air” and many more. His catalog of songs has been recorded by Madonna, Garth Brooks, Josh Groban, Drake, Weird “Al” Yankovic, and countless others. In 2015, one of McLean’s four handwritten manuscripts of the lyrics to “American Pie” was auctioned by Christies, selling for just over $1.2 Million. 2019 honored Don with a star on the Las Vegas Walkway of Stars and his song “And I Love You So” was the theme for Prince Harry and Megan Markle’s wedding. Now in 2020, Don signed a recording contract with Time Life to release his catalog of recordings as well as the highly anticipated new album Still Playin’ Favorites, was released October 23rd. “American Pie” will be featured in the Avengers Black Widow and the Tom Hanks movie BIOS and much more to be announced. And when you think things are slowing down, not so for Don McLean! 2021 will mark the 50th anniversary of American Pie with a world tour to follow.

About Home Free:
All-vocal Country entertainers Home Free have made their mark on the music scene, racking up nearly 600,000 album equivalents globally; embarking on major international tours; amassing 429+ MILLION views and over 1 MILLION Subscribers on YouTube, and being declared “Country music fans’ favorite a cappella group” (Taste of Country). The acclaimed group recently lit up the holidays with their latest album, WARMEST WINTER (Home Free Records), the follow-up to their top-charting DIVE BAR SAINTS album that debuted at #2 on the Billboard Country Album Sales chart. Home Free’s extensive catalog spotlights six Top 10 albums, including TIMELESS, FULL OF (EVEN MORE) CHEER, FULL OF CHEER, COUNTRY EVOLUTION, and their breakout debut CRAZY LIFE (2014). With praise rolling in from the likes of Billboard, Rolling Stone, FOX & Friends, and American Songwriter, the extraordinary showmen have continued to build a loyal fanbase with their harmony-laden versions of hits by John Mayer, Blake Shelton, Keith Urban, Maren Morris, the Oak Ridge Boys, and more.