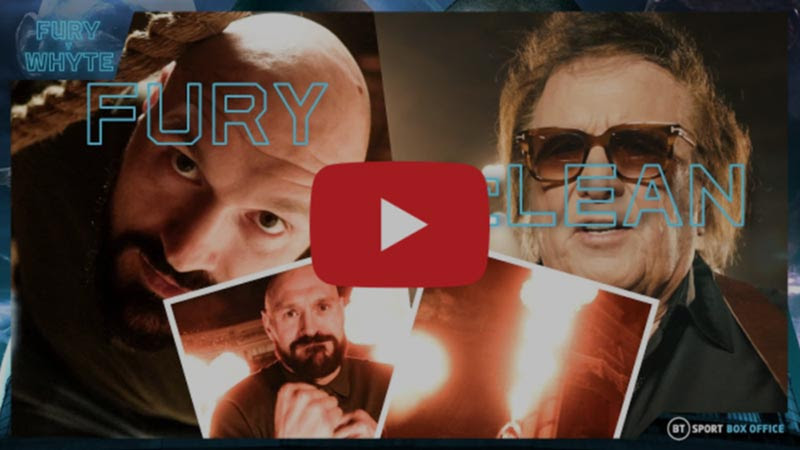 LONDON, UK – Ahead of defending his world title belts, heavyweight champion of the world Tyson Fury has joined forces with legendary American singer-songwriter Don McLean to create a brand-new rendition of “American Pie”.

Fury, who will take on fellow Brit Dillian Whyte at Wembley Stadium on April 23rd live on BT Sport Box Office, famously performed “American Pie” after defeating Deontay Wilder in Fury v Wilder II in 2020. The song has since become synonymous with the boxer who is not afraid to showcase his musical talent.

The latest iteration of the song sees McLean singing the verses to “American Pie”, perfectly articulating Tyson’s comeback story before he’s joined in the chorus by the Gypsy King himself. The Morecambe-based fighter is no stranger to jumping on the mic, having previously appeared on Robbie William’s song “Bad Sharon” in 2019.

Ahead of Fury v Whyte the song will be aired on BT Sport to promote the fight and will be played in the stadium on fight night as 94,000 fans pack into Wembley stadium to witness the first all-British heavyweight world title fight for a generation.

In addition to celebrating Fury’s homecoming, the duet coincides with the 50th anniversary of ‘American Pie’ – both the album and single as well as the release of a children’s book, a documentary about the pop culture impact of the song, and a world tour which will come to the UK and Europe starting in September 2022.

Fans will be able to watch all the build-up, undercard and the main event of Fury v Whyte exclusively live on BT Sport Box Office.

BT Sport has a track record of innovation, operating from one of the industry’s most sophisticated sports TV studios, and delivering world-firsts around Virtual Reality, Dolby Atmos, 4K UHD, and remote production. Its achievements have been recognized with awards from IBC, Promax, Music Week, and more.

About BT:
BT Group is the UK’s leading telecommunications and network provider and a leading provider of global communications services and solutions, serving customers in 180 countries. Its principal activities in the UK include the provision of fixed voice, mobile, broadband, and TV (including Sport) and a range of products and services over converged fixed and mobile networks to consumer, business, and public sector customers. For its global customers, BT provides managed services, security, and network and IT infrastructure services to support their operations all over the world. BT consists of four customer-facing units: Consumer, Enterprise, Global, and its wholly-owned subsidiary, Openreach, which provides access network services to over 650 communications provider customers who sell phone, broadband, and Ethernet services to homes and businesses across the UK.

British Telecommunications plc is a wholly-owned subsidiary of BT Group plc and encompasses virtually all businesses and assets of the BT Group. BT Group plc is listed on the London Stock Exchange.

About Don McLean:
Don McLean is a Grammy award honoree, a Songwriter Hall of Fame member, a BBC Lifetime Achievement Award recipient, and his smash hit “American Pie” resides in the Library of Congress National Recording Registry and was named a top 5 song of the 20th Century by the Recording Industry of America (RIAA). A New York native, Don McLean is one of the most revered and respected songwriters in American history. After paying his dues in the New York club scene in the late ‘60s, he went on to score mega-hits like “Vincent (Starry, Starry Night),” “Castles in the Air” and many more. His catalog of songs has been recorded by Madonna, Garth Brooks, Josh Groban, Drake, “Weird Al” Yankovic, and countless others. In 2015, McLean’s handwritten manuscript of the lyrics to “American Pie” was auctioned by Christies, selling for just over $1.2 Million. 2019 honored Don with a star on the Las Vegas Walkway of Stars and his song “And I Love You So” was the theme for Prince Harry and Megan Markle’s wedding. Don landed a new recording contract with Time Life in 2020, with whom he released a catalog of recordings as well as a new album Still Playin’ Favorites. 2021 brought Don’s “American Pie” features in the Avengers’ Black Widow and the new Tom Hanks movie Finch. Don received a star on the Hollywood Walk of Fame, celebrated the 50th anniversary of “American Pie,” recorded a version of the song with a cappella group Home Free, a children’s book has been written, and much more! And when you think things are slowing down, not so for Don McLean!