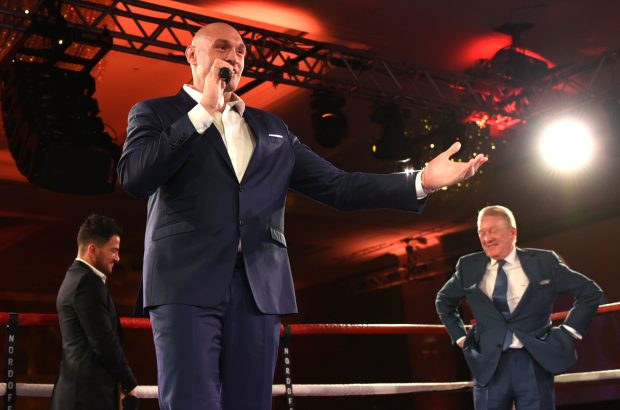 TYSON FURY proved he is a man of many talents as he belted out his version of American Pie last night.

The Gypsy King attend the Nordoff Robbins charity event alongside wife Paris and the likes of David Haye, Frank Warren and even Peter Andre.

After he grabbed the microphone while standing in the ring, he yelled: “I want everybody on their feet, including David ‘The Hayemaker’ Haye. Come on!

“Everybody. I want everybody to sing along and join in because I know everybody knows the words.”

Fury, who recently recorded a Christmas single with Robbie Williams, then belted out his extraordinary rendition of the Don McLean classic.

He sung the same song following his controversial draw with Deontay Wilder in December.

And he sent fans wild as he performed American Pie on stage in Marbella alongside Towie star James Argent.

After a video of last night’s performance was posted to Twitter, one fan said: “Frank [Warren] in there doing the shoulder roll.”

Another simply added: “He’s having a blast.”