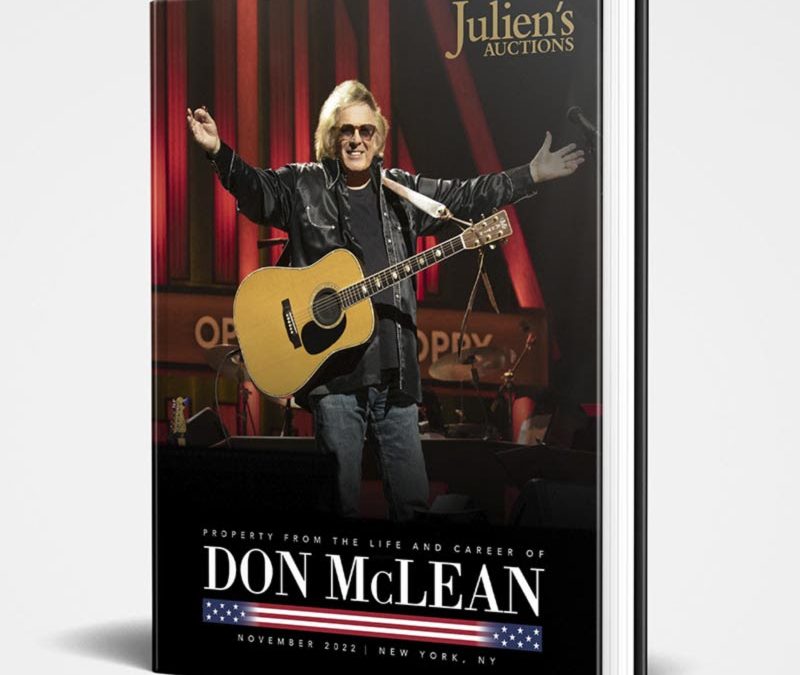 A Portion of Proceeds Benefit the Don McLean Foundation and “Kicking The Stigma,” The Indianapolis Colts and Irsay Family’s Mental Health Awareness Initiative

NEW YORK – (November 3, 2022) – Julien’s Auctions has announced an additional marquee item – the Martin 00-21 acoustic guitar owned and used by Don McLean to write and record his classic single “Vincent (Starry, Starry Night)”– will be publicly sold for their first time at auction on day one of Icons & Idols: Rock ‘N’ Roll, the world-record-breaking auction house to the stars’ three-day event running Friday, November 11th to Sunday, November 13th live at the Hard Rock Cafe® New York and online at julienslive.com. The storied instrument will join the previously announced highlight of Don McLean’s original lyrics of “Vincent (Starry, Starry Night)” (estimate of one million dollars) in this exclusive auction presentation featuring over 300 items from the personal collection of McLean from his homes in Garrison, New York, Camden, Maine and Palm Desert, California. A portion of the proceeds will go to the Don McLean Foundation, which contributes funds to underserved college students, homeless shelters, and food banks in the state of Maine and throughout the country and “Kicking The Stigma,” the Indianapolis Colts and the Jim Irsay family’s national initiative to raise awareness about mental health disorders and to remove the stigma too often associated with these illnesses.

“Vincent (Starry, Starry Night),” an emotional tribute to the artist Vincent Van Gogh, and the second single off of McLean’s seminal GRAMMY-nominated album American Pie charted in the U.S. and the U.K. and ranked Billboard’s Top 100 songs for the year. McLean purchased two Martin 00-21s as a result of a musical encounter with prominent blues musician Josh White who played the same model guitar and retrofitted this one with new Schaller tuners to make it easier to tune on stage. This guitar, along with his beloved Martin D-28 and his Vega banjo, would make up his “first family of instruments” as McLean stated in the 2012 documentary about his life and career, American Troubadour. The 1969 Martin 00-21 can be seen in photographs of McLean with this musical “family,” relaxing and working in his residence in Cold Springs, NY.

As a singer-songwriter hailing from the folk revival movement, McLean has often spoken about the importance of the guitar in his creative process. During a conversation with Norm of Norman’s Rare Guitars in Southern California, he stated: “The guitar has been the way I’ve written a lot of songs, like a song like ‘And I Love You So’… And even ‘Vincent’ was really off the guitar.”

Along with “American Pie,” “Vincent” is one of McLean’s most beloved works and was written before his eight-and-a-half-minute magnum opus. McLean was inspired to write the song after reading a book about the close relationship Van Gogh had with his brother Theo and the pair’s shared mental health struggles. While Van Gogh’s mental health has been the subject of much speculation and sensationalism, McLean wanted to approach the subject from a less clinical and more humanizing perspective.

This 1969 Martin 00-21 was the primary instrument used for the conceptualization and recording of McLean’s other songs: “Til Tomorrow,” “Winterwood,” “Sister Fatima,” “The Grave” and “Empty Chairs,” the song that inspired Lori Lieberman’s “Killing Me Softly,” later a smash hit recorded by Roberta Flack and the highly successful cover version by The Fugees. In 1971, young songwriter Lieberman went out to see McLean perform at The Troubadour in Los Angeles and was immediately moved by his music. The lyrics, then, describe McLean performing the song he’d conceived of and recorded with the 1969 Martin 00-21: “I heard he sang a good song / I heard he had a style / And so I came to see him / To listen for a while / And there he was this young boy / A stranger to my eyes / Strumming my pain with his fingers / Singing my life with his words / Killing me softly with his song…”

McLean used this particular guitar exclusively on stage from 1969-1971, concluding when he gave it to a friend’s son (who retained the guitar until recently). McLean also used the 1969 Martin 00-21 for live performances of “Vincent,” including one at Columbia University in 1971. McLean’s gentle fingerstyle playing serves as the foundation for the song’s nuanced examination of Van Gog where he would often perform it with only the guitar as accompaniment. The instrument can also be seen being held and played by a homeless man as McLean looks on, a moment that was captured during a photo shoot with photographer George Whiteman who shot McLean for the iconic cover of American Pie.

Fans can also have a chance to view this guitar as well as other historic rock’n’roll artifacts at Hard Rock Cafe in Times Square New York Monday, November 7, 2022 – Friday, November 13, 2022, before the auction.

REGISTERING TO BID
Registration is required to bid in this online auction and can be done in person at the exhibition, or online before the sale at the JuliensAuctions.com Registration page to bid by phone, proxy, or in person, or online at JuliensLive.com to bid live online, or by calling (310) 836-1818. For inquiries, please email info@juliensauctions.com or call 310-836-1818.

PLACING BIDS
There are four ways to bid in this sale:

HARD ROCK®:
With venues in 76 countries spanning 262 locations that include owned/licensed or managed Hotels, Casinos, Rock Shops®, and Cafes – Hard Rock International (HRI) is one of the most globally recognized companies. Beginning with an Eric Clapton guitar, Hard Rock owns the world’s most valuable collection of music memorabilia at more than 83,000 pieces, which are displayed at its locations around the globe. In 2018, Hard Rock International was recognized as a Forbes Magazine Top Employer for Women and Land Operator of the Year at the Global Gaming Awards. In 2019, Hard Rock International was honored as one of Forbes Magazine’s America’s Best Large Employers, Forbes Magazine’s Top Employers for Women, and No. 1 in J.D. Power’s 2019 North America Hotel Guest Satisfaction Study among Upper Upscale Hotel Chains. Hard Rock destinations are located in the world’s greatest international gateway cities, including its two most successful flagship properties in Florida and home to the world’s first Guitar Hotel® in South Florida, where its headquarters are located. The brand is owned by HRI parent entity The Seminole Tribe of Florida. For more information on Hard Rock International visit www.hardrock.com or shop.hardrock.com.