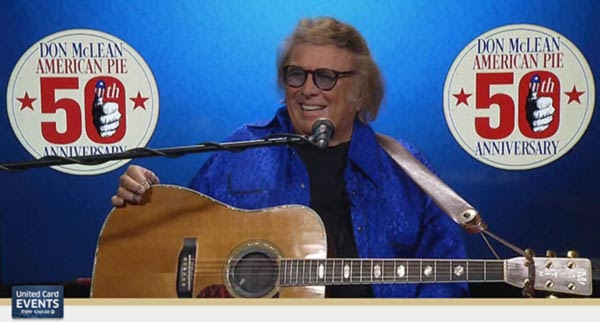 Songwriter Hall of Fame member Don McLean performed for a sold-out virtual event for United Card Events From Chase, which was moderated by music journalist/author Alan Light, who is a frequent contributor to the New York Times and the Wall Street Journal. The two discussed McLean’s musical career and the stories behind some of his favorite songs. Cardmembers also joined into the action when McLean took questions during a hosted live question-and-answer session.

Recorded May 26, 1971, Don McLean’s “American Pie” has become one of the most iconic rock songs of all time and celebrates its 50th anniversary this year. Every line of the song has been analyzed time and time again to try to unearth the real meaning. McLean refused to sanction any of the many interpretations, adding to its mystery.

“It was really great to strap my guitar on and sing a few songs especially after being off for the past year,” says McLean. “I loved the interactive approach that United Events From Chase provided, not only to me but to the fans. It was a really special event.”

One of the unique perks as an attendee of this cardholder event was that they offered a virtual photo booth. It had various templates where participants could take a photo with their laptop camera and they emailed their photo “with Don” creating a unique souvenir.