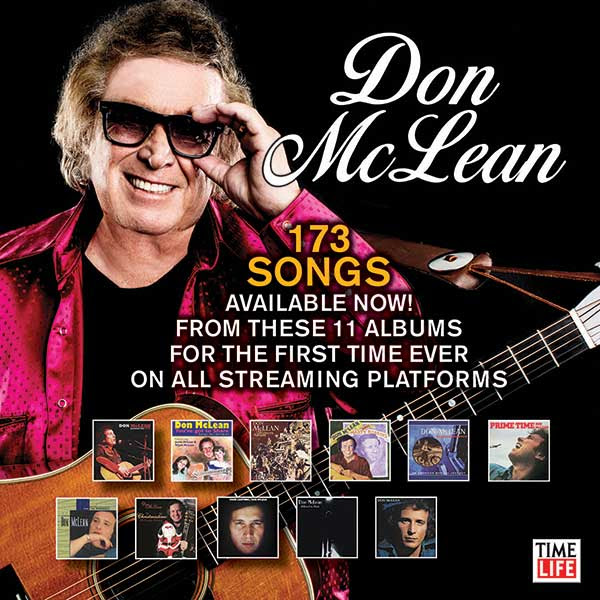 FAIRFAX, Va. – Don McLean, Grammy award-winning artist and Songwriter Hall of Fame member, gears up for the digital release of 173 songs from 11 of his classic albums through a partnership with Time Life which is distributed by Warner Music Group. For the first time since their original release, Addicted To Black, Believers, Chain Lightning, Christmastime!: The Complete Collection, For The Memories, Greatest Hits Live, Prime Time, Rearview Mirror, Don McLean Sings Marty Robbins, The Western Album and You’ve Got Songs To Share: Songs For Children will be available on all digital platforms on May 1.

“Working with Time Life on this project has been the best thing that has happened to my recordings in years,” says McLean. “Everything I have ever done will be available on all the streaming platforms out there. Therefore, any song of mine you may have heard will be available. I hope people will have fun finding new songs.”

As the vault opens once again to reveal some of the greatest lyrical masterpieces of all time, anticipation grows. In uncertain times of social distancing, these albums will provide just the right amount of musical healing and comfort that the world needs.These tunes will be reintroduced as a warm friend to those who collected on vinyl and a fresh face to the world of streaming with the special release of McLean’s standout staple songs.

McLean has brilliantly turned out a multitude of albums throughout his 50-year career, which began in 1969, and was elevated quickly with the 1971 release of the Billboard Top 5 Song of the Century, American Pie.

To keep up with Don McLean announcements click here and follow his socials linked below.
Facebook | Instagram | Twitter | YouTube
About Don McLean:
Don McLean is a Grammy award honoree, a Songwriter Hall of Fame member, a BBC Lifetime Achievement award recipient, and his smash hit “American Pie” resides in the Library of Congress National Recording Registry and was named by the Recording Industry of America (RIAA) a top 5 song of the 20th Century. A New York native, Don McLean is one of the most revered and respected songwriters in American history. After paying his dues in the New York club scene in the late ‘60s, he went on to score mega-hits like “Vincent (Starry, Starry Night),” “Castles in the Air” and many more. His catalog of songs have been recorded by Madonna, Garth Brooks, Josh Groban, Drake, Weird “Al” Yankovic, and countless others. In 2015, one of McLean’s four handwritten manuscripts of the lyrics to “American Pie” was auctioned by Christies, selling for just over $1.2 Million. 2019 honored Don with a star on the Las Vegas Walkway of Stars and his song “And I Love You So” was the theme for Prince Harry and Megan Markle’s wedding. Now in 2020, Don signed a recording contract with Time Life to release his catalog of recordings as well as the much anticipated new album Still Playin’ Favorites, which will be released in the Fall. “American Pie” will be featured in the Avengers Black Widow and the Tom Hanks movie BIOS and much more to be announced. And when you think things are slowing down, not so for Don McLean! 2021 will mark the 50th anniversary of American Pie with a World Tour to follow.

About Time Life:
Time Life is one of the world’s pre-eminent creators and direct marketers of unique music and video/DVD products, specializing in distinctive multi-media collections that evoke memories of yesterday, capture the spirit of today, and can be enjoyed for a lifetime. TIME LIFE and the TIME LIFE logo are registered trademarks of Time Warner Inc. and affiliated companies used under license by Direct Holdings Americas Inc., which is not affiliated with Time Warner Inc. or Time Inc.