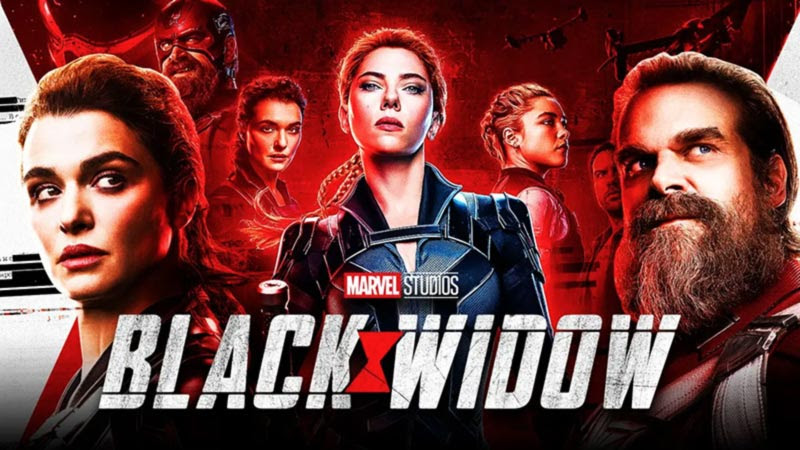 NASHVILLE, Tenn. – American actor David Harbour, star of Marvel Studios’ Black Widow (Brokeback Mountain, Quantum of Solace, The Green Hornet, Suicide Squad, Hellboy) has revealed it was his suggestion for Don McLean’s “American Pie,” to be included as a pivotal moment throughout the new motion picture. The usage of McLean’s unforgettable classic takes place in two separate settings, one as the “family” is leaving Ohio, and the second sets the tone during a dramatic scene that highlights the inner turmoil amongst the group and this song single-handedly gets them back on the right track.

“My character is fumbling trying to be a father and in the end, he fails. She tells him to get out. In the script, he says something and leaves. I felt, there’s gotta be something a little more profound. Wouldn’t it be interesting if back in America when [Belova] was little and was terrified having been taken from her family the Red Guardian would put her in the car and drive around and play ‘American Pie’? So from then on, she tells daddy to put in the tape.” – David Harbour explained to Insider.com

“Alexei is only able to get through to Yelena by singing the Don McLean song “American Pie”, which [was] featured at the top of the film as a young Yelena asks it to be played when the family flee the United States.” – Isobel Lewis / Independent.com

“When the movie employs the song the second time, it’s to acknowledge the dream that Yelena lost. 21 years later, she’s aware of that loss in a way she couldn’t have been then. Adopted into a family of spies, Yelena wound up in the Red Room at just six – though that’s apparently older than Natasha when she began her training. Alexei singing the song for her, even while he wears his Red Guardian suit, is an acknowledgment of what he helped take from her, and a way to mend the burned bridge between them.” – Amanda Bruce / GameRant.com

Over the weekend, the placement of “American Pie,” has garnered a lot of attention, proving the soundtrack’s importance truly goes hand in hand when setting a scene theatrically. As mentioned in Insider.com, Independent, CBR.com, GameRant.com, ScreenRant.com, TIME, Comicbook.com, and more, the improvisation of the scene, thanks to Harbour’s suggestion, led to a full-circle moment that helped define the movie.

About Don McLean:
Don McLean is a Grammy award honoree, a Songwriter Hall of Fame member, a BBC Lifetime Achievement Award recipient, and his smash hit “American Pie” resides in the Library of Congress National Recording Registry and was named by the Recording Industry of America (RIAA) a top 5 song of the 20th Century. A New York native, Don McLean is one of the most revered and respected songwriters in American history. After paying his dues in the New York club scene in the late ‘60s, he went on to score mega-hits like “Vincent (Starry, Starry Night),” “Castles in the Air” and many more. His catalog of songs has been recorded by Madonna, Garth Brooks, Josh Groban, Drake, “Weird Al” Yankovic, and countless others. In 2015, one of McLean’s four handwritten manuscripts of the lyrics to “American Pie” was auctioned by Christies, selling for just over $1.2 Million. 2019 honored Don with a star on the Las Vegas Walkway of Stars and his song “And I Love You So” was the theme for Prince Harry and Megan Markle’s wedding. 2020 brought Don a new recording contract with Time Life which he released a catalog of recordings as well as a new album Still Playin’ Favorites. Now, in 2021 “American Pie” appears in the Avengers’ Black Widow and the upcoming Tom Hanks movie BIOS, Don will receive a star on the Hollywood Walk of Fame, a children’s book will be released, and much more! And when you think things are slowing down, not so for Don McLean!